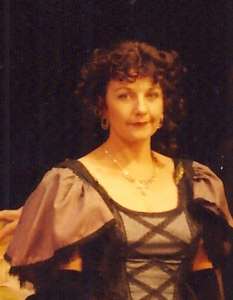 She has had many principal roles including Violetta in “La Traviata”, Valenciene in “Merry Widow”, Fiordiligi in “Cosi fan tutte”, Rosalinde in “Die Fledermaus”, Marsinah in “Kismet”, Mabel in “Pirates of Penzance”, Eurydice in “Orpheus in the Underworld”.

With her eclectic taste and wide experience Marguerite continues her goal of bringing opera, musicals and variety concerts to our South West audiences and at the same time providing opportunities for our local talent.

Rob joined the South West Opera Company Inc in 1995 after performing for a number of years with the Gilbert & Sullivan Society of W.A. at His Majesty’s theatre and around the regional areas of the state. He has been actively involved in many country musical productions both in performance and direction.

With SWOC he has directed The Pirates of Penzance, The Mikado, HMS Pinafore, The Gondoliers, Patience, The Secret Garden, The Wizard of Oz and co-directed Les Miserables. He has performed many roles in SWOC productions. His most memorable and rewarding role was as Javert in the 1995 and 2005 productions of Les Miserables when he co-directed the show with John Milson.

Deb is a multiple award-winning costume and set designer. She studied the History of Costume and Design at Bentley Design Campus and Perth Theatre Design College. Deb then joined SWOC with her performing daughter Holly in 2009 for the production of Oliver! Since then, she has used her talents to design and coordinate SWOC’s costumes for the production of Die Fledermaus, The Mikado, Pirates of Penzance, The Wizard of Oz, Beauty and the Beast, for which she received a Finley nomination for Best Costumes, Cinderella, for which she won Best Costumes in a Musical at the Finely Awards and was also nominated for Best Set, and Patience. In 2014, Deb joined the Artistic Direction team for SWOC.

Mary-Ellen has been dancing since the age of three, specialising in Jazz, Tap and acrobatics.

She is currently working at Geographe Primary School, running the school’s dance program as well as teaching her own Year Four class.  Mary-Ellen has a Bachelor of Arts in primary education, specialising in human movement, and has a separate Theatrical Dancing Teacher’s Diploma with the Commonwealth Society of Teachers of Dancing.  Her first association with SWOC was as a can can dancer in their 1999 production of Orpheus in the Underworld.